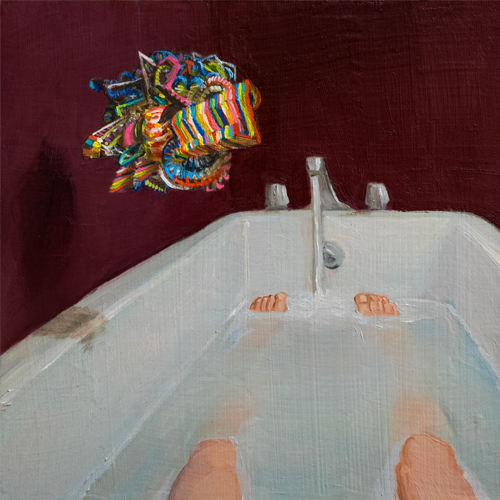 This recording sees Bay Area improvisers Tom Weeks (alto saxophone) and Nathan Corder (electronics) team up with Chicago improvisers Eli Namay (upright and electric bass) and Bill Harris (drums) to document their first meeting in Chicago in April of 2018. The quartet maneuvers between brutal, apocalyptic bop soundscapes, textures, and pointillism, with improvisations largely framed by a concise and miniature format.

Tom Weeks is a composer, improviser, and saxophonist from the San Francisco Bay Area, CA. He has received a Bachelor's degree in Jazz Composition from Berklee College of Music, Boston, MA, and a Master's degree in Composition from Mills College, Oakland, CA. He has studied with Roscoe Mitchell, Fred Frith, Zeena Parkins, Pauline Oliveros, Chris Brown, W.A. Mathieu, Steve Adams, Richard Evans, Phil Wilson, and Greg Hopkins, among others. His music is influenced by various African-American musical traditions, the historical avant-garde, and the heavy metal and hardcore traditions; utilizing improvisation, extended techniques, and traditional and experimental notational practices.

Nathan Corder is an Oakland-based composer of works for electronics, objects, and arrays of people. Focusing on translational procedures, transduction, and process-based composition, Corder’s music has been performed throughout the U.S. and abroad. Active as a composer and improviser on custom-designed electronics and guitar, Corder has collaborated with artists such as Roscoe Mitchell, William Winant, Jaap Blonk, and Tatsuya Nakatani. He is also an active member of the bands TONED, monopiece, Nude Tayne, and Jitters.

Eli Namay has been working to develop a musical practice that is informed by critical theory and political activism. Artistically, he is particularly focused on how cultural and economic symbols mediate social relations (ideology, social reproduction, etc). Eli is interested in exploring ways economic and ideological influences on music might be disrupted artistically, thus creating a genuinely creative practice that is emotionally healing for both the listener and practitioner. This has led him to an interest in non/pan-idiomatic improvisation, experimental notation that gives rise to a multiplicity of outcomes, and the use of liminal perceptual frameworks.

Bill Harris is a drummer, composer, improviser, and audio engineer from Pittsburgh currently based in Chicago. He is an active member of Chicago's improvised and creative music scene, whose music has been featured at venues such as Constellation, Elastic Arts, The Hungry Brain, The Hideout, and many others. He co-leads groups such as Four Letter Words, Devouring the Guilt, and Bowlcut, and currently operates and produces for Amalgam, an independent, 100% artist-run collective and label, documenting creative and improvised music in Chicago. Bill also runs an independent recording studio, contributing as a producer and as a multi-instrumentalist on studio sessions.